What is tft capacitive touch screen:

What kinds of interface available for tft capacitive touch screen?

How the capacitive touch screen connected to tft lcd screen?

Which is better for frame bonding and optical bonding? 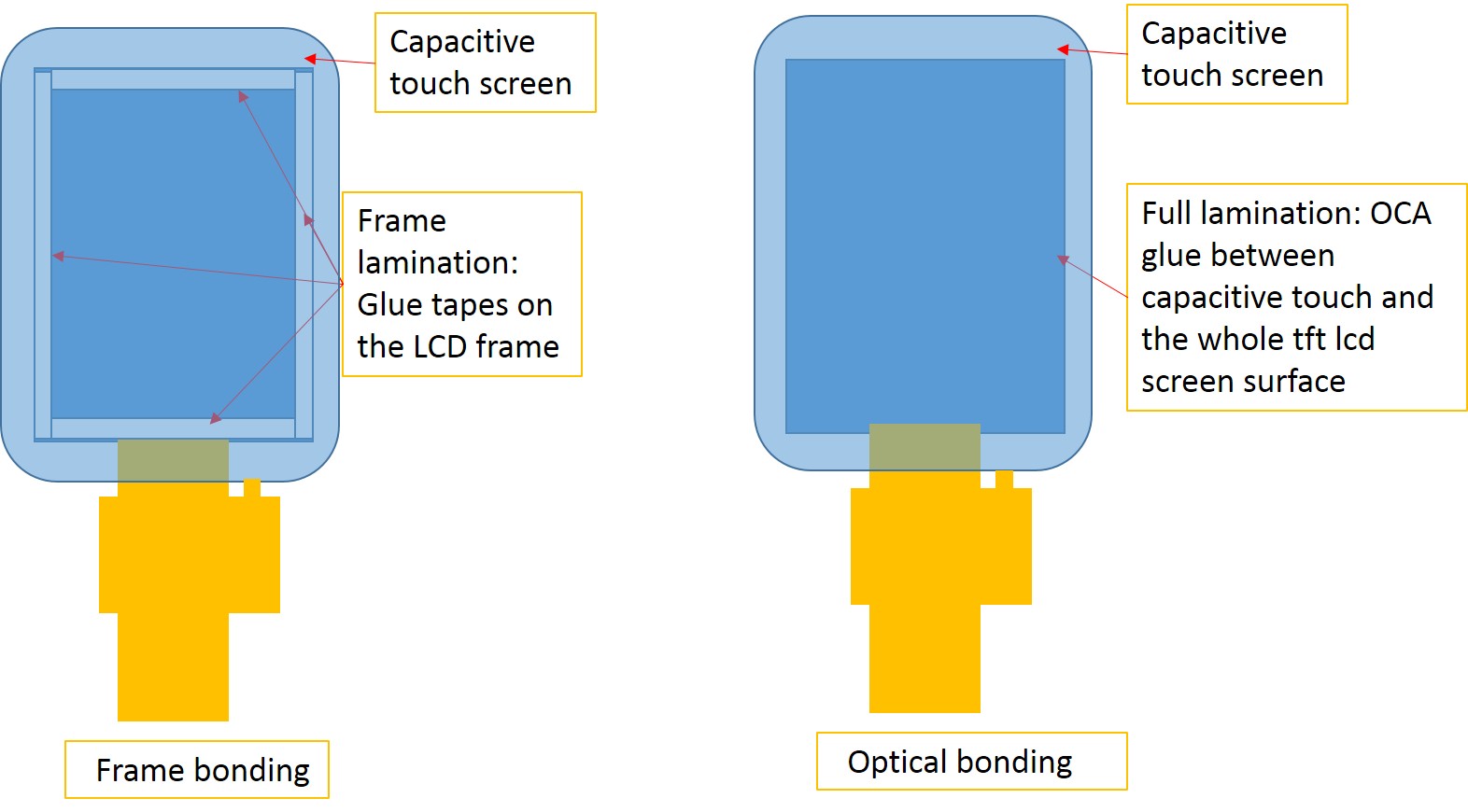 What kinds of tft panel can be better for optical bonding with CTP?

Capacitive touchscreen displays rely on the electrical properties of the human body to detect when and where on a display the user touches. Because of this, capacitive displays can be controlled with very light touches of a finger and generally cannot be used with a mechanical stylus or a gloved hand. Examples of devices with TFT capacitive touchscreens are the Apple iPhone

Capacitive touch screens distinguish and sense specific touch location based on the electrical impulses in a human body, typically the fingertip. This enables capacitive touchscreens to not require any actual force to be applied to the screen’s surface; at the same time, capacitive screens typically don't respond to styluses or gloved hands due to the lack of electrical impulses generated.

Touch sensor will product a varying capacitance that will interact with a relaxation oscillator circuit.

Capacitive sensors are constructed from many different media, such as copper, Indium tin oxide (ITO) and printed ink. Copper capacitive sensors can be implemented on standard FR4 PCBs as well as on flexible material. ITO allows the capacitive sensor to be up to 90% transparent (for one layer solutions, such as touch phone screens). Size and spacing of the capacitive sensor are both very important to the sensor's performance. In addition to the size of the sensor, and its spacing relative to the ground plane, the type of ground plane used is very important. Since the parasitic capacitance of the sensor is related to the electric field's (e-field) path to ground, it is important to choose a ground plane that limits the concentration of e-field lines with no conductive object present.

Designing a capacitance sensing system requires first picking the type of sensing material (FR4, Flex, ITO, etc.). One also needs to understand the environment the device will operate in, such as the full operating temperature range, what radio frequencies are present and how the user will interact with the interface.

Projected capacitive touch (PCT) technology is a capacitive technology which allows more accurate and flexible operation, by etching the conductive layer. An X-Y grid is formed either by etching one layer to form a grid pattern of electrodes, or by etching two separate, parallel layers of conductive material with perpendicular lines or tracks to form the grid; comparable to the pixel grid found in many liquid crystal displays (LCD). 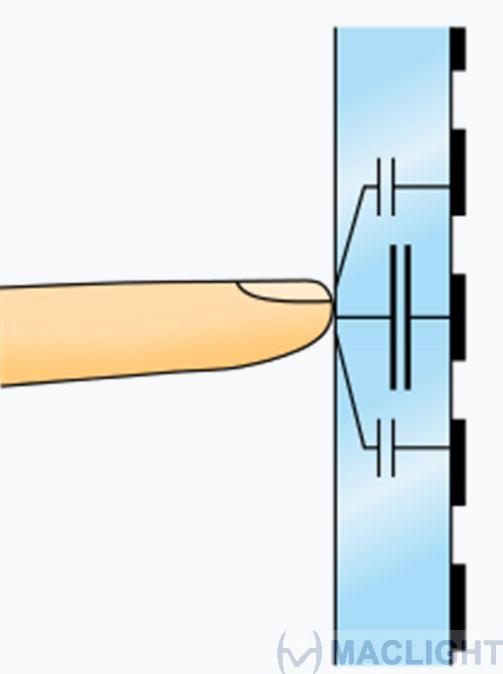 The greater resolution of PCT allows operation with no direct contact, such that the conducting layers can be coated with further protective insulating layers, and operate even under screen protectors, or behind weather and vandal-proof glass. Because the top layer of a PCT is glass, PCT is a more robust solution versus resistive touch technology. Depending on the implementation, an active or passive stylus can be used instead of or in addition to a finger. This is common with point of sale devices that require signature capture. Gloved fingers may or may not be sensed, depending on the implementation and gain settings. Conductive smudges and similar interference on the panel surface can interfere with the performance. Such conductive smudges come mostly from sticky or sweaty finger tips, especially in high humidity environments. Collected dust, which adheres to the screen because of moisture from fingertips can also be a problem.

There are two types of PCT: self capacitance, and mutual capacitance.

Mutual capacitive sensors have a capacitor at each intersection of each row and each column. A 12-by-16 array, for example, would have 192 independent capacitors. A voltage is applied to the rows or columns. Bringing a finger or conductive stylus near the surface of the sensor changes the local electric field which reduces the mutual capacitance. The capacitance change at every individual point on the grid can be measured to accurately determine the touch location by measuring the voltage in the other axis. Mutual capacitance allows multi-touch operation where multiple fingers, palms or styli can be accurately tracked at the same time.