Resistive touchscreen panel comprises several layers, the most important of which are two thin, transparent electrically-resistive layers separated by a thin space. These layers face each other with a thin gap between. The top screen (the screen that is touched) has a coating on the underside surface of the screen. Just beneath it is a similar resistive layer on top of its substrate. One layer has conductive connections along its sides, the other along top and bottom. A voltage is applied to one layer, and sensed by the other. When an object, such as a fingertip or stylus tip, presses down onto the outer surface, the two layers touch to become connected at that point: The panel then behaves as a pair of voltage dividers, one axis at a time. By rapidly switching between each layer, the position of a pressure on the screen can be read.

Resistive touchscreens also suffer from poorer contrast, due to having additional reflections from the extra layers of material (separated by an air gap) placed over the screen.

Capacitive touchscreen panel consists of an insulator such as glass, coated with a transparent conductor such as indium tin oxide (InSnO). As the human body is also an electrical conductor, touching the surface of the screen results in a distortion of the screen's electrostatic field, measurable as a change in capacitance. Different technologies may be used to determine the location of the touch. The location is then sent to thecontroller for processing.

Unlike a resistive touchscreen, one cannot use a capacitive touchscreen through most types of electrically insulating material, such as gloves. This disadvantage especially affects usability in consumer electronics, such as touch tablet PCs and capacitive smartphones in cold weather. It can be overcome with a special capacitive stylus, or a special-application glove with an embroidered patch of conductive thread passing through it and contacting the user's fingertip.

The largest capacitive display manufacturers continue to develop thinner and more accurate touchscreens, with touchscreens for mobile devices now being produced with 'in-cell' technology that eliminates a layer, such as Samsung's Super AMoled screens, by building the capacitors inside the display itself. This type of touchscreen reduces the visible distance (within millimetres) between the user's finger and what the user is touching on the screen, creating a more direct contact with the content displayed and enabling taps and gestures to be more responsive.

A simple parallel plate capacitor has two conductors separated by a dielectric layer. Most of the energy in this system is concentrated directly between the plates. Some of the energy spills over into the area outside the plates, and the electric field lines associated with this effect are called fringing fields. Part of the challenge of making a practical capacitive sensor is to design a set of printed circuit traces which direct fringing fields into an active sensing area accessible to a user. A parallel plate capacitor is not a good choice for such a sensor pattern. Placing a finger near fringing electric fields adds conductive surface area to the capacitive system. The additional charge storage capacity added by the finger is known as finger capacitance, CF. The capacitance of the sensor without a finger present is denoted as CP in this article, which stands for parasitic capacitance. 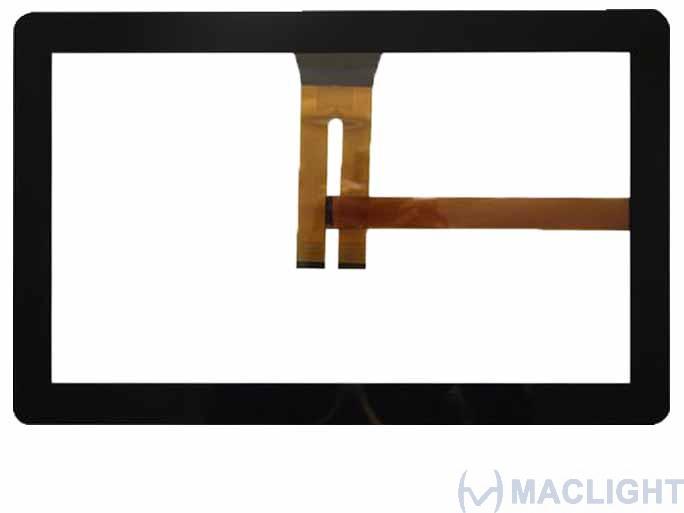 In this basic technology, only one side of the insulator is coated with a conductive layer. A small voltage is applied to the layer, resulting in a uniform electrostatic field. When a conductor, such as a human finger, touches the uncoated surface, a capacitor is dynamically formed. The sensor'scontroller can determine the location of the touch indirectly from the change in the capacitance as measured from the four corners of the panel. As it has no moving parts, it is moderately durable but has limited resolution, is prone to false signals from parasitic capacitive coupling, and needscalibration during manufacture. It is therefore most often used in simple applications such as industrial controls and kiosks. 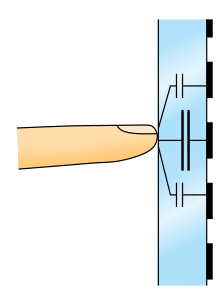 Projected capacitive touch (PCT; also PCAP) technology is a variant of capacitive touch technology. All PCT touch screens are made up of a matrix of rows and columns of conductive material, layered on sheets of glass. This can be done either by etching a single conductive layer to form a grid pattern of electrodes, or by etching two separate, perpendicular layers of conductive material with parallel lines or tracks to form a grid. Voltage applied to this grid creates a uniform electrostatic field, which can be measured. When a conductive object, such as a finger, comes into contact with a PCT panel, it distorts the local electrostatic field at that point. This is measurable as a change in capacitance. If a finger bridges the gap between two of the "tracks", the charge field is further interrupted and detected by the controller. The capacitance can be changed and measured at every individual point on the grid (intersection). Therefore, this system is able to accurately track touches.[34] Due to the top layer of a PCT being glass, it is a more robust solution than less costly resistive touch technology. Additionally, unlike traditional capacitive touch technology, it is possible for a PCT system to sense a passive stylus or gloved fingers. However, moisture on the surface of the panel, high humidity, or collected dust can interfere with the performance of a PCT system. There are two types of PCT: mutual capacitance and self-capacitance.

This is a common PCT approach, which makes use of the fact that most conductive objects are able to hold a charge if they are very close together. In mutual capacitive sensors, a capacitor is inherently formed by the row trace and column trace at each intersection of the grid. A 16-by-14 array, for example, would have 224 independent capacitors. A voltage is applied to the rows or columns. Bringing a finger or conductive stylus close to the surface of the sensor changes the local electrostatic field which reduces the mutual capacitance. The capacitance change at every individual point on the grid can be measured to accurately determine the touch location by measuring the voltage in the other axis. Mutual capacitance allows multi-touch operation where multiple fingers, palms or styli can be accurately tracked at the same time.

Self-capacitance sensors can have the same X-Y grid as mutual capacitance sensors, but the columns and rows operate independently. With self-capacitance, the capacitive load of a finger is measured on each column or row electrode by a current meter. This method produces a stronger signal than mutual capacitance, but it is unable to resolve accurately more than one finger, which results in "ghosting", or misplaced location sensing.

Use of styli on capacitive screens

Capacitive touchscreens don't necessarily need to be operated by a finger, but until recently the special styli required could be quite expensive to purchase. The cost of this technology has fallen greatly in recent years and capacitative styli are now widely available for a nominal charge, and often given away free with mobile accessories.

There are several principal ways to build a touchscreen. The key goals are to recognize one or more fingers touching a display, to interpret the command that this represents, and to communicate the command to the appropriate application.

In the most popular techniques, the capacitive or resistive approach, there are typically four layers:

When a user touches the surface, the system records the change in the electric current that flows through the display.

Dispersive-signal technology which 3M created in 2002, measures the piezoelectric effect—the voltage generated when mechanical force is applied to a material—that occurs chemically when a strengthened glass substrate is touched.

There are two infrared-based approaches. In one, an array of sensors detects a finger touching or almost touching the display, thereby interrupting light beams projected over the screen. In the other, bottom-mounted infrared cameras record screen touches.

In each case, the system determines the intended command based on the controls showing on the screen at the time and the location of the touch.

Users must be able to accurately select targets on touchscreens, and avoid accidental selection of adjacent targets, to effectively use a touchscreen input device. The design of touchscreen interfaces must reflect both technical capabilities of the system, ergonomics, cognitive psychology and human physiology.

Guidelines for touchscreen designs were first developed in the 1990s, based on early research and actual use of older systems, so assume the use of contemporary sensing technology such as infrared grids. These types of touchscreens are highly dependent on the size of the user's fingers, so their guidelines are less relevant for the bulk of modern devices, using capacitive or resistive touch technology. From the mid-2000s onward, makers of operating systems for smartphones have promulgated standards, but these vary between manufacturers, and allow for significant variation in size based on technology changes, so are unsuitable from a human factors perspective.

Much more important is the accuracy humans have in selecting targets with their finger or a pen stylus. The accuracy of user selection varies by position on the screen. Users are most accurate at the center, less so at the left and right edges, and much less accurate at the top and especially bottom edges.

Users of handheld and portable touchscreen devices hold them in a variety of ways, and routinely change their method of holding and selection to suit the position and type of input. There are four basic types of handheld interaction:

Use rates vary widely. While two-thumb tapping is encountered rarely (1-3%) for many general interactions, it is used for 41% of typing interaction.

In addition, devices are often placed on surfaces (desks or tables) and tablets especially are used in stands. The user may point, select or gesture in these cases with their finger or thumb, and also varies the use.

Touchscreens can suffer from the problem of fingerprints on the display. This can be mitigated by the use of materials with optical coatings designed to reduce the visible effects of fingerprint oils, as most of the modern smartphones, which lessen the actual amount of oil residue (which includes alcohol), or by installing a matte-finish anti-glare screen protector, which creates a slightly roughened