Organic light-emitting diodes (oleds) can be found in hundreds of products. Because of
their breath-taking performance and ‘green technology’ attributes, OLEDs will likely appear in an increasing variety of new products offerings in the next year. OLED
lighting will soon follow. Following are some of the key myths and
misunderstandings.

Myth #1: OLEDs have lifetime issues.
OLEDs are emissive, similar to plasma displays and cathode ray tubes. They degrade over time. LCDs are transmissive displays that operate by filtering a backlight. LCDs typically last as long as their backlights, which also degrade over time or can fail catastrophically. Early in the development of OLED displays module, the lifetime (defined as the time it takes for the display to reach 50% of the original luminance) was lower than typical LCD lifetimes. However, with tremendous progress in materials development, OLED displays have lifetimes comparable to or better than LCDs. Many OLED displays currently on the market have lifetimes exceeding 50,000 hr. In addition, lifetimes for OLED materials being developed by
Cambridge Display Technology, Universal Display and others have lifetimes 2-3 times greater than typical LCDs. Some are in products today and more are expected to reach the market within two years.

Myth #2: OLEDs use more power than LCDs. By comparison to backlit LCDs that typically consume the maximum power to display any image, OLEDs use power as a function of the specific image being displayed. Dark images consume small amounts of power while light or white images consume maximum power. Because the early OLED materials were not so efficient, OLEDs did not always have an energy efficiency advantage over LCDs.
Through the use of phosphorescence (which can convert four times more electricity into light than other materials), OLEDs are significantly more power-efficient than LCDs. In fact, LCD makers are trying to replicate the power advantages of OLEDs by using LEDs in some high-end TVs, to dynamically dim the backlight when a low gray-scale image is presented. Nokia reports that its OLED-based mobile phones deliver equivalent perceived luminance at significant power savings in four of five usage modes. OLED televisions present even greater savings. Independent tests show that OLED televisions consume 40% to 50% less power and deliver a higher quality image than their LCD equivalents. For white or very light images, OLEDs still consume more power than LCDs, but with continued development of new materials and display designs, the OLED power consumption advantage is expected to grow. This advantage is also expected to enable the development of white OLEDs for lighting uses to compete with today’s very inefficient incandescent bulbs and mercury-containing fluorescent lamps. For these reasons, OLEDs are beginning to become recognized as an important ‘green’ or eco-friendly product for the display and lighting markets. 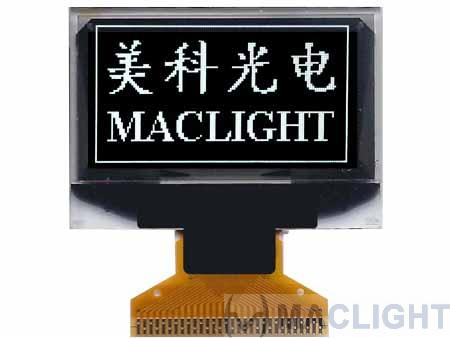 Myth #3: OLEDs are too expensive for the average consumer.

OLED displays are used in a number of mobile devices such as cell phones, personal media players (PMP) and digital cameras. In almost every case, the products are directed at consumers looking for the best visual experience and the costsare in line with other products directed in the same market. In products with larger displays, e.g., Sony’s 11-inch TV and Kodak’s 7.6-inch Digital Photo Frame, the products are very expensive. These price points are consistent with very high-end niche products made in very small volumes in early stages of product commercialization, but are not representative of what OLEDs will cost as they mature and reach high volume manufacturing scales. For most small high performance display applications, OLEDs are today competitively priced because they are built in factories of comparable size to LCDs. However, LCD makers use factories with large substrates to make TVs and monitors, but OLED makers are still using the same small substrate factories to build their larger displays. As OLED manufacturers add factories with larger substrates, their plant-level costs should reach parity with LCDs. Add to this the fact that OLEDs contain far fewer components; OLED displays are likely to be less expensive than comparably sized LCDs.


Myth #4: OLEDs are difficult to see in bright sunlight. All transmissive (LCD) and emissive (OLED) display technologies are challenged in bright sunlight, because the light reflects off the display. To mitigate the reflection, some LCDs offer a transflective mode, which is a combination of a reflective and a transmissive display, to lessen the problem but compromise on color and contrast performance in the process. OLED displays, using specially designed polarizers have been specially designed to attain daylight readability in bright sunshine, but by comparison to LCDs, retain their color and contrast performance. happening with OLED technology, and it’s pretty good. Active matrix OLEDs offer the best video you’re going to see from any display technology. Their color range equals or exceeds NTSC standards. Contrast ratios in the range of 1,000,000 to 2,000,000:1 make those colors look even more brilliant. Best of all, each frame of video is crisp, as OLEDs refresh in microseconds, as opposed to LCDs’ milliseconds. In addition, there is no loss of contrast at off angles. Tech Digest recently analyzed the three competing technologies. The conclusion: in a field where the three most important criteria are picture quality, picture quality, picture quality, the writer described the result in fight terms with OLED the clear winner. OLEDs are also thinner and lighter than LCDs, because they do not require a backlight and two polarizers. OLEDs use low-temperature processing and have proven to be compatible with flexible backplanes, which would make the end device even thinner and curvable. OLEDs offer great potential for efficient lighting solutions with recent work from the OLLA project achieving 46 lumens per Watt (lm/W) with lifetimes greater than 10,000 hr (a standard incandescent bulb offers 14 lm/W with a 1000 hr lifetime). Great progress is being made by a number of companies, including Cambridge Display Technology, Eastman Kodak Company, Idemitsu Kosan, Novaled and Universal Display. Recently, Universal Display demonstrated a device with 100 lm/W, 8,000 hr at 1000 nits. Compact fluorescent lamps (CFLs) offer up to 57 lm/W with a lifetime of 12,000 hr, but they also contain mercury, posing challenges in both handling and disposal. With continued development, OLED lighting should surpass CFLs in performance, both eliminating the mercury and providing opportunities for innovative designs based on OLED’s ability to provide area light in a very thin package.

For know more OLED products, please contact us at www.szmaclight.com