OLED display module is thiner than traditional LCD display, because OLED screen no need the backlight unit, it can emit light by itself. Besides the thinner, OLED screen could be made in flexible, the newest fexible screen all are made by oled module, because low-temperature processing oled emit light materials can be evaporated to the flexible subplated, while tft lcd screen can not make it like that, because the liquild crystal have to be sealed inside the tft lcd cell, the flexible subplated can not provide a reliable sealing condition for flexible tft lcd screen.

Oled can emitting light by itself and no need backlight, through the use of phosphorescence (which can convert four times more electricity into light than other materials), OLEDs are significantly more power-efficient than LCDs. In fact, LCD manufacturers are trying to replicate the power advantages of OLEDs by using LEDs in some high-end TVs,

OLEDs are emissive, similar to plasma displays and cathode ray tubes. They degrade over time. LCDs are transmissive displays that operate by filtering a backlight. LCDs typically last as long as their backlights, which also degrade over time or can fail catastrophically. Early in the development of OLED displays, the lifetime (defined as the time it takes for the display to reach 50% of the original luminance) was lower than typical LCD lifetimes. However, with tremendous progress in materials development, OLED displays have lifetimes comparable to or better than LCDs. Many OLED displays currently on the market have lifetimes exceeding 50,000 hr. In addition, lifetimes for OLED materials being developed by Cambridge Display Technology, Universal Display and others have lifetimes 2-3 times greater than typical LCDs. Some are in products today and more are expected to reach the market within coming years. Such as Maclight 0.96” oled in white color, its lifetime can be 50,000 hours in 60cd/m2 brightness display. But the higher brightness of OLED, its lift time would be decreased accordingly. 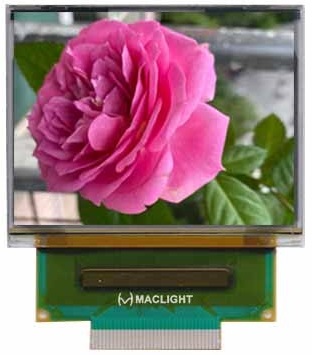 3. OLED vs lcd on contrast and viewing angle:

To color AM oled display module, AM-OLEDs offer the best video you’re going to see from display technology. Their color can reach higher NTSC standards. Contrast ratios in the range of 1,000,000 to 2,000,000:1 make those colors look even more brilliant theoretically. But in fact, as the IPS LCD or LTPS TFT LCD technology are going to mature, the color tft lcd screen is almost near to the color oled display module in viewing angle and contrast in display performance nowadays, please see the comparision picures as below, we use IPS tft lcd vs OLED module as below, because IPS tft has the outstanding performance in viewing angle, then you can the ips tft lcd is almost has similar display performance as the color oled display (of course, AM-oled is still little better in wide viewing angle, but not so much). but the cost of oled screen are 2~3 times than tft lcd screen, so for color display, we don't think it is necessary to choose oled display. for tft lcd module, the tft lcd glass and backlight can be made more thinner than before, its thickness can be almost similar nowadays.

All transmissive LCD display technologies are challenged in bright sunlight, because the light reflects off the display. To mitigate the reflection, the LCDs offer a transflective mode, which is a combination of a reflective and a transmissive display, to lessen the problem but compromise on color and contrast performance in the process.

OLED displays, because it has a blacker background in non-display area, and by using specially designed polarizers, oled attain better daylight readability in bright sunshine,  OLED display has better retain their color and contrast performance than lcd.

In the same time, OLED module has better wide temperature than lcd screen, it has without the response time problem when in low temperature and display fade in high temperature as comparing to lcd screen. so oled module is more suitable for sunligh readable display.

Maclight can also custom make OLED module by custom the PCB or interface for the oled panel, and make the custom oled module for our customers.