Oled vs LCD | Which is better?

Talking about oled vs lcd, we have a common sense that OLED display module is better than lcd display module in display performance, is it really true? we can see Apple and Samsung, they are using the OLED screen in their high end mobile phone. On the other hand, Apple still keep to use TFT LCD screen in some new serial iPhone. China well-know smartphone company Xiaomi, they deprecated the previous AMOLED screen, turn back to LCD display module in their newest T10 serial mobile phone.Xiaomi's senior product marketing manager, explained that a high-quality LCD screen is much better than a medium-quality OLED display screen. So OLED vs LCD, which is better? Regardless the power difference between OLED and LCD, let's concern about the differences in color and disadvantages between the oled display module and tft lcd display module.

OLED vs LCD in display resolution and performance: 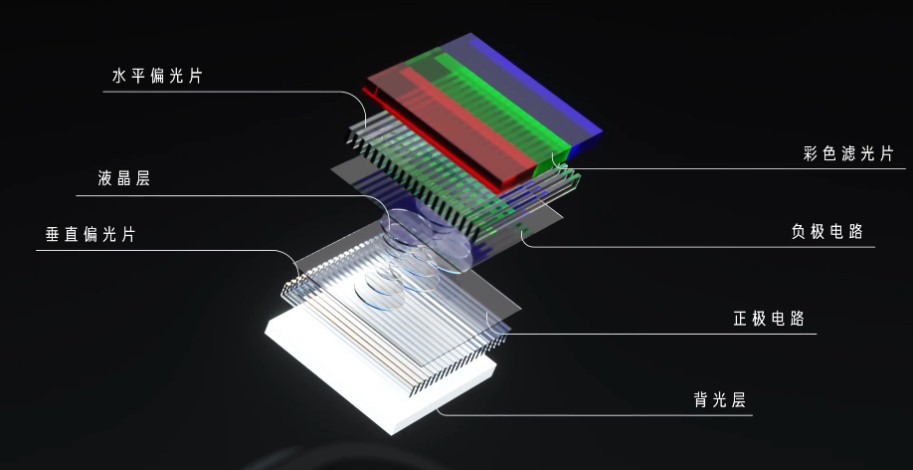 For the convenience of understanding, we reduce some layers, after removing the vertical and horizontal polarizer and the positive and negative circuit, only left to luminous plate, liquid crystal layer and color filter. and then we can see the lcd display module’s layer work as a shutter. 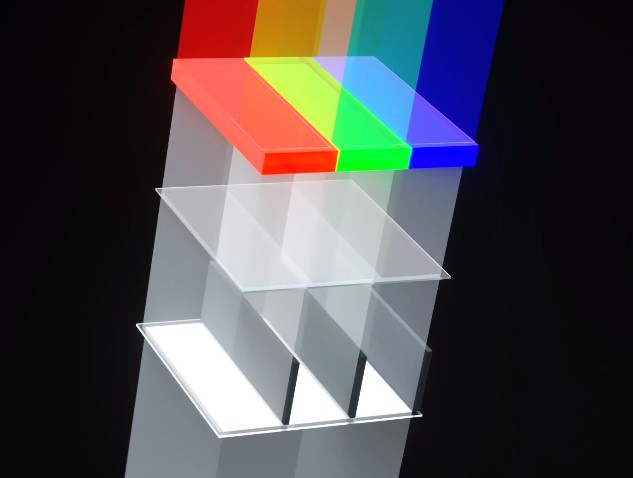 The backlight emits light, and the shade adjusts the Angle to determine how much light passes through the color filter. Different percent of the RGB tri-color light mix to produce different colors of light. Does that sound good? If you want the pixels at this location to display pure red, then ideally the shade under the blue and green blocks should be completely closed. At this point, only the red color can be displayed accurately. But it is only ideal status, the reality is different to we would think. Complete closure is only theoretical, and in fact,  there are more or less incomplete closures. Something like this, more or less a little white light is leaking out. It lead to the problem that colors mixed and colors inaccuracy.

This problem is most obvious in black display. Because the shade is not closed accurately, there is always light leaking out. In fact, an LCD screen does not show absolute black; it shows a darker gray than the color on the nearby. Because of this characteristic. As a result, LCD screens are always slightly less accurate than OLED color displays. 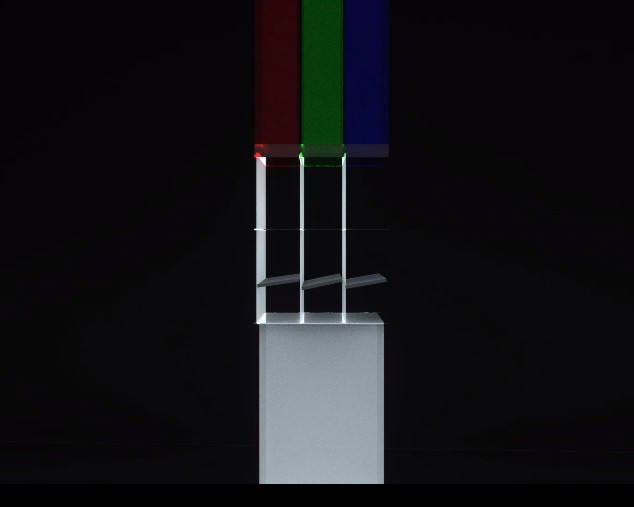 OLED screens are thinner because they only have three layers, being thinner means that mobile phone manufacturers can cram in one more functional device or a larger battery, and OLED phones have selling points in the same time.

OLED vs LCD in lifetime

After the introduction of the principle of light on OLED vs LCD, It seems OLED screen takes advantage vs LCD, OLED display module has absolute advantages in reality performance, such as faster response speed, higher brightness, higher contrast, and wider viewing Angle, etc., however, due to the influence of the lifetime of blue OLED emitting material on the overall life of OLED screen and other factors, the development of OLED screen still faces many challenges. If you've ever used a smartphone that had an OLED screen four or five years ago, you would know how the oled screen burned. The most obvious manifestation of OLED burning was the yellowed screen, with a clear separation between the top status bar and the home screen. Now, with the "maturity" of A-screen technology, the problem of screen burning has been basically solved, and the most critical method is to change the arrangement of pixels in the OLED screen. It is well known that pixels on traditional LCD screens are arranged in the classic red, green and blue RGB model of the display industry: since the human eye is most sensitive to red, green and blue, we can get different colors by adjusting the brightness of these three colors. However, because green is in the middle of the visible spectrum, where the human eye is most sensitive, while red and blue at the edge of the spectrum are less sensitive, which explains why some OLED screens are so green that they are easy to spot.

Why not use the standard RGB array? That's a good question. The standard RGB array does better in display. But in the same time there is a new problem, that is, the life decay is fast, the screen light is similar as light bulbs, that used for a long time, its brightess will be decay.

LCD screens rely on the bottom of the backlight to emit light, even if there is a whole screen light decay, the naked eyes, and it is very difficult to detect by eyes. while OLED screen, on the other hand, it emits light independently from each pixel, so the decay rate is separately. For example, if you have a block that displays a green icon all the time, the green color in that block will fade and darken over time. It's like the picture is printed on the screen. This is known as OLED display burned, or the uneven aging of pixels. It looks something like this.

It lead to OLED display module have to a variety of pixel arrays, which have become one of the distinguishing features of OLED screens. The main cause for OLED screen life time is the blue pixel. Since the luminous efficiency of blue pixels is much lower than that of red and green pixels, it is necessary to increase the current for blue to achieve the same brightness as red and green pixels. This causes blue pixels to decay faster, which directly affects the color accuracy of screen and lifetime. At the end, Oled manufacturers have been increasing the blue pixel luminous area of the new pixel arrangement to reduce the blue pixel current to improve the oled life time. This is also the diamond arrangement and so on. The original pixel arrangement scheme was Samsung's RGB PenTile, which was different from the traditional RGB. Due to color balance and calibration and other factors, PenTil enlarged the area of blue pixels, but also enlarged the same area of red pixels, which were also less sensitive to human eyes .Although PenTile eventually significantly improved the short oled display module lifetime, it also brought about a "negative effect" : the effective pixel was reduced by about 1/3, and the equivalent standard RGB PPI value (the larger value means screen more clearly) dropped significantly, and the display effect was equivalent to 720P of LCD. This also became an important reason for many users to complain the OLED screen is not so clearly and granularity of 1080P oled resoluton. Even Samsung upgrade to the new OLED RGB arrangement to diamonds and improve this problem, but still couldn't make OLED screen resolution equivalent to the LCD screen ,its actual resolution is only about 80% of the standard RGB, so in order to ensure effective display effect, the high grade OLED phone choose 2 k resolution OLED (equivalent to 1080 p LCD). it is the solution for OLED manufacturers to prolong the lifetime of OLED screens and prevent screen burning. With standard RGB arrays, it is sure that OLED screens have a shorter lifetime than TFT LCD display module.