What is TFT meaning

TFT means “thin film transistor”, it is a display technology of lcd display, lcd stand for “liquid crystal display”, both are flat display panel for the screen such as a computer monitor or television set. An LCD is a fluidic display device that uses a crystalline filled liquid to manipulate a rear illumination polarized source by means of an electrostatic field between two thin transparent metal conductors such as indium tin oxide (ITO) in order to present an image to the viewer.  LCD included passivity-matrix lcd and active-matrix lcd, TFT is active-matrix lcd display, most of monochrome lcds are passivity-matrix lcd. A thin-film transistor (TFT) is a special kind of MOSFET (metal-oxide-semiconductor field-effect transistor) made by depositing thin films of an active semiconductor layer as well as the dielectric layer and metallic contacts over a supporting (but non-conducting) substrate. 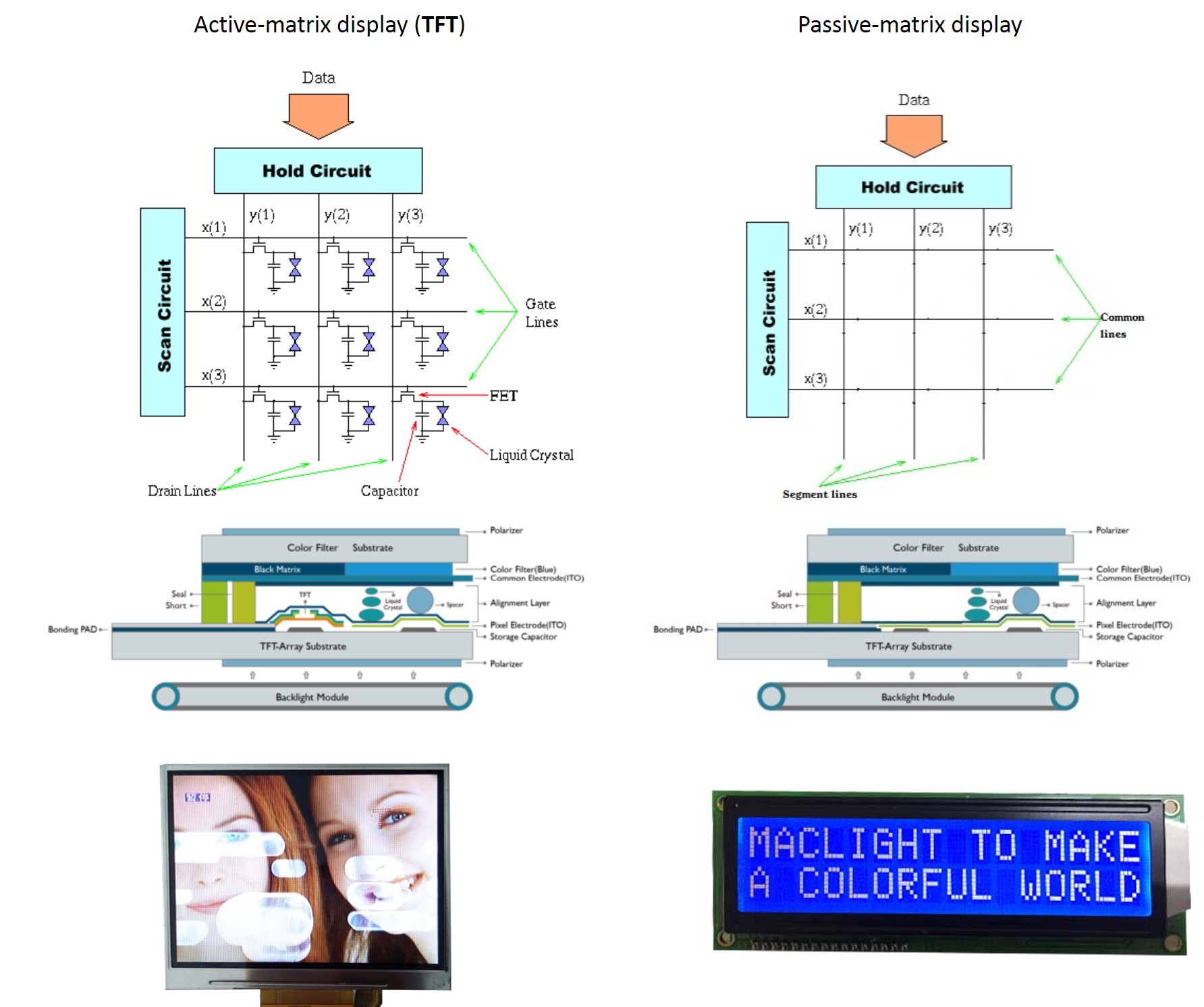 TFT-based displays have a transistor for each pixel on the screen. This allows the electrical current that illuminates the display to be turned on and off at a faster rate, which makes the display brighter and shows motion smoother. LCDs that use TFT technology are called "active-matrix" displays, which are higher-quality than older "passive-matrix" displays. TFT technology provides the best resolution of all the flat display technologies, but it is also expensive than monochrome lcd. So TFTs are used in high-quality LCD displays, if you see a LCD monitor at your local computer market, it should be an active tft lcd display,  Basically, it is a high-quality tft lcd monitor.

What is passive matrix display?

What is an active-matrix display (TFT)?

What is an Active-matrix Display (TFT)? Alternatively referred to as TFT ( thin-film transistor) and AMLCD ( active-matrix LCD ), an active-matrix display is an LCD ( liquid crystal display) introduced with the IBM ThinkPad in 1992.

It uses a matrix of thin film transistors(TFTs) and capacitors to control the image produced by the display. The brightness of each pixel is controlled by modifying the electrical charge of the corresponding capacitors.

What is the difference for TFT screen and LCD screen?

What does TFT touch screen mean?

The tft touch screen can both display content and act as an interface device for whoever is using it. TFTs, also called TFT screens, are a type of active matrix LCD display capable of displaying content with high-contrast, clear and bright color pixels.