Which is better TFT screen? tn TFT vs IPS lcd

If comparing tft screen in display performance, IPS LCD is better than traditional a-si TN tft lcd display in viewing angle and color conversion, IPS is with higher contrast than TN tft lcd. If comparing in power consumption, IPS tft panel is higher around 15% than regular tft screen (TN display mode), if comparing TN panel vs ips in cost, IPS lcd is higher around 30%~50% than ordinary TFT panel. In this article, we would introduce the differences for IPS lcd and tft lcd in details.

To evaluate the display performance, we have to evaluate from the 5 key characters of tft display. Instead of AMoled or pm OLED display, lcd display is passive display, it can not emit light by itself, it have to use light source for displaying, we call it backlight, since we always use it as the light source on the back of LCD display. So the lcd display module’s key characters is the viewing angle, contrast, response time, brightness of the lcd module, NTSC (color saturation), resolution. The brightness of lcd is mostly related to the backlight brightness, and NTSC is related to the color filter of lcd, the resolution of IPS lcd and tft lcd have no big difference, so we are mainly discuss the viewing angle, contrast, response time and power consumption for IPS LCD vs TFT in this article.

Why IPS LCD have a better viewing angle than tn tft panel? 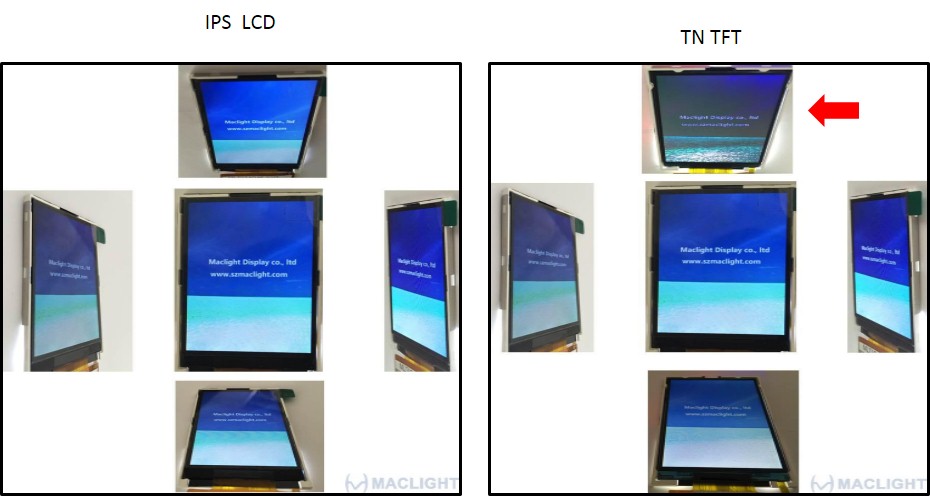 Which contrast is better? IPS vs TN tft panel

The contrast of IPS LCD is better than tft lcd, why? Because as we mentioned on the upper, IPS LCD is negative display mode, and the light can not transmit it when power off, it would be more black when in display off,

so TFT LCD IPS is more easily to get the high contrast because it have more blacker background when in power off. Because the high contrast on IPS LCD, so IPS lcd can be more brilliant color image – this is a huge advance in technology than a Twisted Nematic (TN) display. 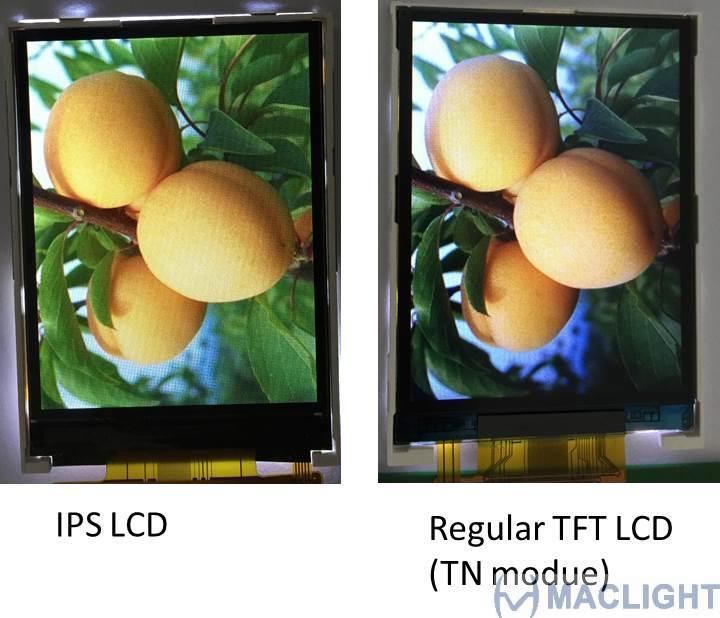 Which cost is better: IPS vs tn tft lcd?

The ips lcd cost would be higher around 30%~50% than TN tft lcd, the main reason is less tft lcd manufacturers are making IPS LCD, but the market is high demand, so the ips lcd price is higher than tft lcd. on the other hand, the tft lcd production technology is more mature than IPS LCD, it has a better production ratio than IPS LCD.

Which is more suitable for adding touch screen: IPS lcd vs TFT?

What is IPS LCD screen?

IPS (In-Plane Switching) lcd is still a type of TFT LCD, IPS TFT is also called SFT LCD (supper fine tft ), different to regular tft in TN (Twisted Nematic) mode, the IPS LCD liquid crystal elements inside the tft lcd cell, they are arrayed in plane inside the lcd cell when power off, so the light can not transmit it via the IPS lcd when power off, When power on, the liquid crystal elements inside the IPS tft would switch in a small angle, then the light would go through the IPS lcd display, then the display on since light go through the IPS display,  the switching angle is related to the input power, the switch angle is related to the input power value of IPS LCD, the more switch angle, the more light would transmit the IPS LCD, we call it negative display mode.

What is tn tft lcd? 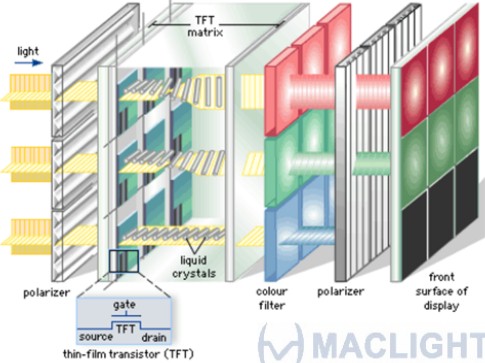 A TFT lcd display is vivid and colorful than a common monochrome lcd display. TFT refreshes more quickly response than a monochrome LCD display and shows motion more smoothly. TFT displays use more electricity in driving than monochrome LCD screens, so they not only cost more in the first place, but they are also more expensive to drive tft lcd screen.The two most common types of TFT LCDs are IPS and TN displays.

Do I need an IPS tft screen:

If you use your screen for creative purposes, to watch movies, video, or mount the screen on the wall that need to view it in all viewing angle, you'll want an IPS for the best viewing angles and color accuracy. because IPS LCD is 170 degree wide viewing angle, people could see the display image without the color shift.

Before we go into the differences, let’s talk about features of each technology. Note that we’re not talking TVs, computer, or tablets, but screens on a much smaller scale, (think 7” or smaller) which uses different rules to fit that scale. First, it’s interesting to discover that the TFT display technologies is the most common type of color display technology; more monochrome displays still out-sell color, due to lower cost and lower power consumption, however, the narrow poor visibility of TFTs in direct sunlight is their downside; but I’m getting ahead of myself here.

IPS technology has come a long way in regards to cell phones and other LCD screens that are even much smaller. (Picture digital clocks on a radio, microwave, and hand-held games) Some of the features of an TFT LCD IPS screen include:

TFT display technologies have developed over the years and have become quite popular in tech circles. The features offered with this advancing technology are:

IPS is the use of light modulating properties from unlit liquid crystals for providing a flat panel or electronic visual display. TFT, which stands for Thin Film Transistor, is an LCD display variant built and marketed for enhanced color, as well as contrast and black levels. IPS further improves display technology by providing better color reproduction and a wider, more accurate viewing angle. IPS TFT LCD technology is widely used for high-performance computers, laptops, tablets and smartphones. When Apple brought it to the public’s attention, it took off, and as they say, the rest is history; but, it really didn’t become widespread or worldwide until just the late 1990’s. Since then, IPS screens have been implemented in homes all over the world, with variations to suit one’s electronic needs.

The active matrix IPS TFT LCD was developed by Hitachi in 1996 as a solution to the display limitations of TN TFT LCDs (Twisted Nematic) from the late 1980s, which are standard non-IPS LCDs. The TN display is known for its flawed viewing angles, such as inverting colors at extreme angles, and poor color quality. By contrast, IPS displays provide wider viewing angles and higher quality color reproduction by altering pixels to be parallel, rather than perpendicular. In an IPS screen, the liquid crystals run parallel with the panels when energized. In a TN display, the crystals turn perpendicular to the top of the panel. High-performance tablets and smartphones deploy IPS display technology because these electronics are commonly used to watch movies, video chat and store photos. The improved angle and color technology features provide an overall better experience for the user. Creative professionals also benefit from an IPS monitor because an IPS LCD that provides a wider color gamut and greater viewing angles help achieve better aesthetic accuracy and superior results.

Other IPS versions include the following technologies:

TFT LCDs are also used in car instrument clusters because they allow the driver to customize the cluster, as well as being able to provide an analogue-like display with digital elements.

Also, most TN panels represent colors using only six bits per RGB color, or 18 bit in total, and are unable to display the 16.7 million color shades (24-bit true color) that are available from graphics cards. Instead, these panels display interpolated 24-bit color using a dithering method that combines adjacent pixels to simulate the desired shade. They can also use a form of temporal dithering called Frame Rate Control (FRC), which cycles between different shades with each new frame to simulate an intermediate shade. Such 18 bit panels with dithering are sometimes advertised as having "16.2 million colors". These color simulation methods are notice able to many people and highly bothersome to some. FRC tends to be most noticeable in darker tones, while dithering appears to make the individual pixels of the LCD visible. Overall, color reproduction and linearity on TN panels is poor. Shortcomings in display colorgamut (often referred to as a percentage of the NTSC 1953 color gamut) are also due to backlighting technology. It is not uncommon for displays with simple LEDor CCFL-based lighting to range from 10% to 26% of the NTSC color gamut, whereas other kind of displays, utilizing more complicated CCFL or LED phosphor formulations or RGB LED backlights, may extend past 100% of the NTSC color gamut, a difference quite perceivable by the human eye.

The transmittance of a pixel of an LCD panel typically does not change linearly with the applied voltage, and the sRGB standard for computer monitors requires a specific nonlinear dependence of the amount of emitted light as a function of the RGB value.

So, are you ready to delve into the pros and cons of these two technologies? Granted, we’ve touched on their features and differences, but now it’s time to ask yourself, which one is better for me or my business?

We’ve been talking largely about Smartphone screens, but since both technologies work on smaller screens, such as clocks and timers or digital thermometers, let’s focus on those.

Because of their superior color and clarity of images, devices using an IPS screens are easy to install on walls, due to their compact form and low-depth. The Super IPS screens offer a higher angle of 170˚ for better clarity and wider viewing, particularly at night. Images remain stable and clear and not sparkly, shiny, like other screens; they also have a longer battery life and screen life, (on smaller screens of course) because of the lower electrical output. The release of heat is lower, again because of the reduced electrical consumption. The colors are also more vibrant and clear, not pixelated like other lower quality-type devices. As mentioned earlier, there are also many variations of IPS technology to suit your needs and desires.

Now we will go over the downside of IPS screens, which we briefly touched on above, which includes a major disadvantage: cost. If you’re just looking for an average Smartphone or don’t need all the fancy coloring and clarity for LCD displays, then cost may not be a big factor; however, this is the main reason why IPS technology is beginning to come down. As with every new invention, discovery or technology, demand is everything. Another disadvantage is that colors may not always transcribe correctly or accurately, which may or may not be a deterrent. Also, high resolutions are not always readily available for personal applications. In certain circumstances, the brightness may not be enough, especially in darkness.

With TFT display technologies, less energy consumption is a big deal, especially when dealing with bigger screens, and of course less electricity means lower cost, overall. The visibility is sharper, meaning no geometric distortion, which is great for these tired, old eyes. The response time and physical design of the screens are also appealing. TFT displays can also save space and be placed virtually anywhere in an office or home, because of the brightly lit feature and crisp clear images.

Some cons of TFT screens deal with the viewing angle, which create distortion, resulting in a less-than-perfect image. Static resolution, meaning the resolution can’t be changed, may also cause a problem, but newer models seem to have tackled that issue. The accuracy of the display of colors is not perfect, specifically strong blacks and bright whites, so when printing an image, it may not display the spectrum of colors.

And there you have it. In the future, even this superb technology will change and new, more exciting technology will take its place. But until then, IPS & TFT screens are forging ahead with their own advances and improvements, so stayed tune. You don’t want to miss it.