How many types of lcd available? (monochrome lcd and color lcd)

What is TN LCD?

TN lcd means (twisted nematic) LCD, the namatic liquid crystal elements inside the lcd glass cell,its twisted angle is 90 degree, integrated the front and rear polarizes on the lcd, the polarized angle is also in 90 degree in cross, it control the light transmission and make the tn lcd display on and off.

What is STN LCD?

With the twist angle in 240°, it bring higher display contrast as the twist angle from TN 90° to STN 240°, as see the graph as below, as the increasing about the lcd contrast in twist angle, when TN lcd can support 8 commons driver (1/8 duty), such as segment lcd, because the TN liquid crystal sharpness is less than STN LCD, if the commons higher than 8, the TN lcd contrast would be decreased dramatically. while STN lcd could support 240 commons (1/240 duty) in maximum. STN not only support 16x2, 20x4 characters lcd, and could support 128x64, 320x240 graphic lcd as well, it is all because the contrast increased due to liquid crystal's twist angle for STN lcd. 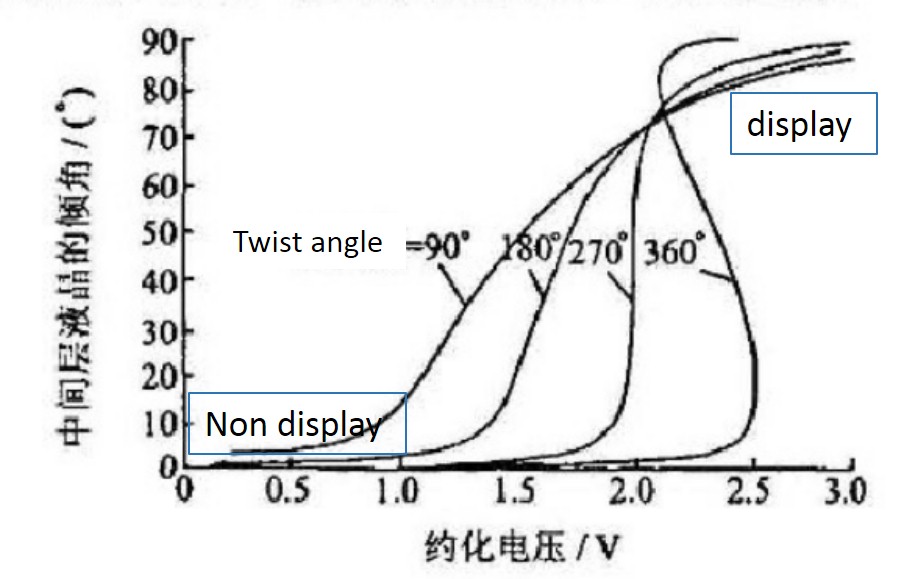 What is FSTN LCD?

FSTN lcd display mode is the profession name for black-white STN mode, it is white background and black display characters. it is the nearest color to paper in monochrome lcd, even its real background is a little near to gray. FSTN LCD mode is one of STN mode, it is mean film STN, instead of the background color to yellow-green color or blue color, FSTN LCD add a optics compensating film on the front of FSTN LCD, the optics compensating  film compensate the linear polarize light and color from STN LCD, the STN LCD color turn to white background after light through the optics compensator film. that is the compensating film turn the oval polarized light to the linear polarized light again, then we could get the white and black lcd display. it is the display mode that near to paper. FSTN lcd is widely used in many display application because of its background. 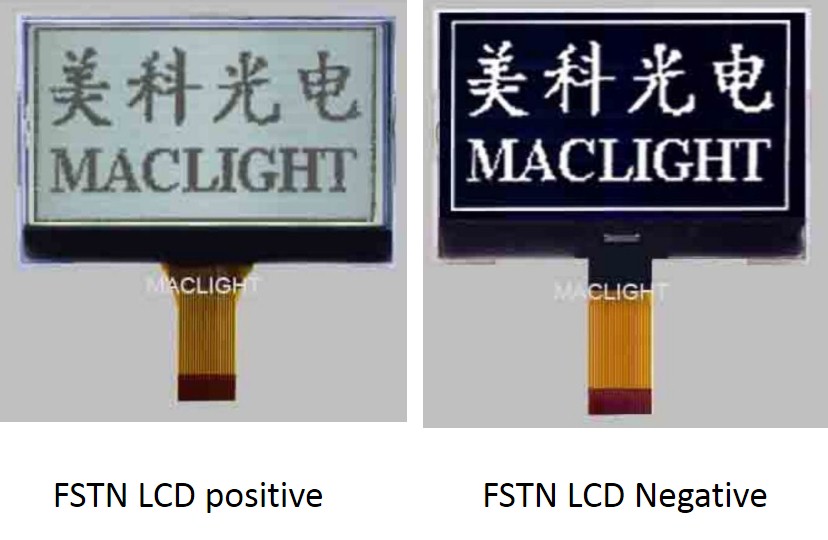 FFSTN is FSTN LCD in negative display mode, it is also a kind of white-black stn lcd mode, FFSTN lcd is negative background with white display characters, while FSTN lcd is white background with black characters, its background would be in black, and display white characters. FSTN lcd would need one layer polarized light compensation, FFSTN would need two layers polarized light compensation on the front and rear polarizers, it would need higher cost than other STN LCD, but FFSTN LCD is best lcd soluton in STN LCD. it is higher contrast than other types of lcd.

CSTN lcd means color STN LCD, its display technology is based on FFSTN mode, but it have a RGB color filter in side the lcd glass, so it can realize to color display, and because FFSTN have high contrast, so instead lcd font display to other STN LCD, CSTN LCD is better in image display than other monochrome lcd. but CSTN lcd is still type of stn lcd, it have cross-talk effect, which decreased the contrast than TFT LCD which is active display mode without cross-talk.

STN LCD display require less power and are less expensive to manufacture than TFT LCDs, STN displays typically has lower image quality and slower response time compare than TFT displays. and tft lcd display is mainly in color display, but STN LCDs have the advantage that it can be made purely reflective for viewing under direct sunlight. STN LCD is a good choice for sunlight readable display in outdoor, for it has a display effect in outdoor and less power consumption. such as transflective STN lcd or reflective STN LCD, it can be display good without backlight light on.

TFT (thin film transistor) is still one kinds of lcd, but it active matrix lcd which without cross-talk with higher contrast than STN LCD or monochrome TN LCD. because of the thin film transistor inside, it is without cross-talk problem, and easily to get the high contrast. besides IPS tft, most of tft lcd is still TN LCD display mode, that is 90 degree twist angle to the liquid crystal.